New research published by Readie this week shows that Germans are apprehensive about embracing new technology and sharing economy platforms. Nearly half say they would not sit in a driverless car (46%) or receive brain surgery from a robot that can operate with more accuracy than a human (43%). Three quarters are unwilling to completely replace cash with digital currencies (74%) – the highest proportion of all European countries included in the study.

In collaboration with ComRes, we polled 9,000 people from across Europe – Bulgaria, Estonia, France, Germany, Italy, Poland, Spain, Sweden and the UK – to test public opinion as the EU works towards establishing a digital single market.

The research explores how open people are to integrating new technology in their lives and what issues might prevent them from harnessing the opportunities. In particular, we focused on attitudes to three ‘hot topics’: future technology like driverless cars and 3D printed food; robotics and drones; and the sharing economy.

How open is the public to using new technology? We found that Germans are the most sceptical, with Bulgarians and Spaniards generally the most willing to try new and future technology.

Autonomous cars could lead to a 90% reduction in accidents, and manufacturers are already testing on roads in London, but the German public is not so enthusiastic about using this technology. Our research shows that only 35% of Germans are willing to sit in a driverless car. The European average is 38%, while 44% of Bulgarians are keen.

While Sweden looks set to become the world’s first cashless society, and over 102 million contactless cards are in current issue in the UK, only 17% of Germans are in favour of abolishing cash in favour of digital currencies. The European average was 37%, and once again, Bulgaria lead the pack, with 54% supportive of solely digital currencies. 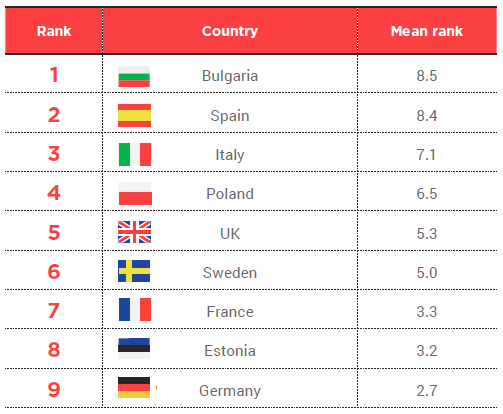 This ranking measures public openness to using new technologies across eleven example questions (see Chapter 1 in the full report). For each question, the countries were ranked according to the responses with the top country receiving a score of 9, the lowest a score of 1. Responses were combined and the mean rank over all questions was calculated for each country.

Digital technology is creating many opportunities for people and businesses across Europe but the pace of change brings unique challenges when designing digital policies and national strategies. Governments and businesses must consider more carefully how open different sections of the population are to new platforms and technologies. A successful digital transformation depends on building a digital world that is inclusive and works for everyone.

2. Digital Pulse: How ready is Sweden for the digital life?