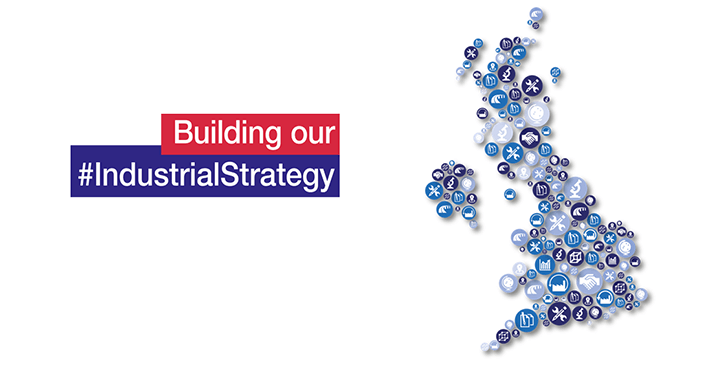 Alongside the Brexit negotiations, the UK is in the midst of a conversation about how to position itself as a leader in sectors that will be critical to its future.

In November last year Prime Minister Theresa May announced the building of a new Industrial Strategy, seeking to address long-term challenges for the UK economy. It aims to identify the sectors in which the UK has competitive advantage to build upon. It also discusses the best role for the Government in supporting and developing such sectors to deliver on the promise of an economy that works for all.

Here, we outline how the UK Government plans to invest in digital as part of this new approach. While digital holds a significant importance as a sector, it is also understood as an important factor enabling growth in other industries and across the UK, boosting skills for the future, and enhancing government efficiency.

In Theresa May’s words, the Industrial Strategy is an opportunity to help deliver a “stronger economy and a fairer society” for the UK. There is, on the surface at least, a desire to create cross-party consensus for the state to play a more active role in shaping the future of industry, especially in the aftermath of the Brexit.

An initial vision was set out in the Industrial Strategy Green Paper, unveiled by the government earlier this year. The Green Paper sparked significant public interest and hundreds organisations addressed formal responses to the Department for Business, Energy and Industrial Strategy. A further publication is expected to be published in Autumn 2017.

The paper identified 10 pillars that will be the basis of its new vision and the guidelines for its interventions over the coming years. 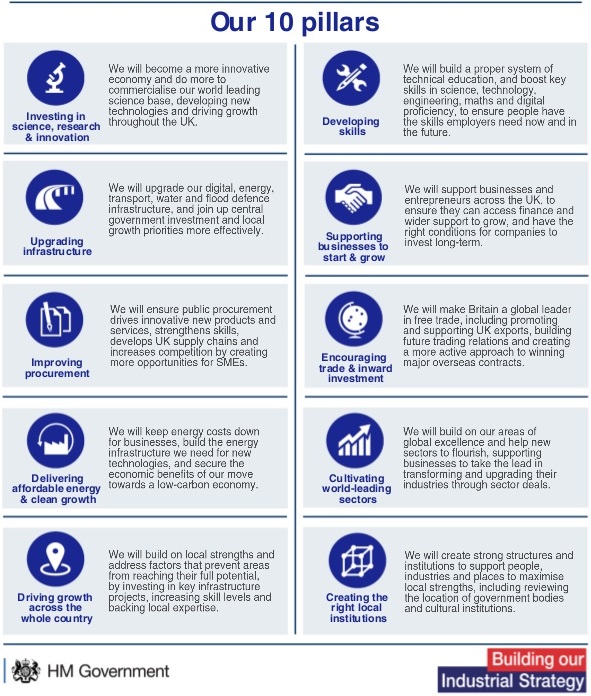 Although digital is not a ‘pillar’ by itself, it is a consistent theme running through the Industrial Strategy. Mentioned more than 50 times throughout the Green Paper, announcements of substantial new funding streams directly target the development of digital technologies, and digital is seen as a crucial opportunity to tackle some of the UK’s most pressing challenges.

1. A sector deal for the digital industry

Based on the premise that businesses are best placed to identify their sector’s challenges and opportunities, Sector Deals are set as an ‘open door’ challenge for the industry. Discussions involve a range of stakeholders including universities and local leaders to propose detailed plans to address challenges such as improving productivity, accelerating growth, creating clusters, increasing exports, boosting skills, and commercialising research.

In the Industrial Strategy the Government suggests that it is keen to work on an early Sector Deal with the digital industry. As a start, a review of industrial digitalisation will be undertaken by Juergen Maier, CEO of Siemens UK and Ireland, to consider how UK industry can benefit from the accelerated adoption of digital technology across advanced manufacturing, including artificial intelligence, robotics, augmented reality solutions, automation technology, blockchain and data analytics.

There is a concern that Sector Deals might be harder to reach with emerging, fast-changing industries (such as digital and tech) compared to sectors that are more defined, with established trade bodies, a mature supply chain and less disruptive innovation. But the digital sector could look to the creative industries for a model as the Government is committed to finalising an early Sector Deal with the creative industries.

The UK’s creative industries occupy a world-leading position, a recent Nesta report mapping the UK’s creative economy showing that they help driving growth throughout the country with no less than 47 clusters. Sir Peter Bazalgette, President of the Royal Television Society and former chairman of the Arts Council, recently published the results of the independent review he conducted into the UK’s creative industries. It explains that the UK’s world-leading music and video games industries, can help underpin future prosperity by utilising and developing new technology, capitalising on intellectual property rights, and growing talent pipelines.

2. Digital as an enabler of growth in other industries and across the UK: new funding streams

Digital technologies and business models have the potential to disrupt all industries, creating new platforms for firms to meet customer needs. The Industrial Strategy acknowledges that digital innovations have become significant elements of economic growth and competitive advantage across industries and across the UK. It sets out some significant new funding to help this happen:

One of the most prominent announcements of the Industrial Strategy is the Industrial Strategy Challenge Fund. Part of a £4.7 billion of additional funding for research and innovation, it seeks to identify and develop UK industries that are fit for the future, capitalising on existing areas of industrial, research and innovation strengths. Backing technologies at all stages, from early research to commercialisation, competitions for funding are currently opening under the six main challenges, including healthcare, artificial intelligence, clean energy and driverless cars, among others.

In the Industrial Strategy the Government also announced the setup of a £400 million new Digital Infrastructure Investment Fund to further develop “full fibre” broadband as the UK still does not compare with European neighbours on many measures of broadband speed and availability. Aiming to boost commercial finance for emerging fibre broadband providers, £740 million will be attributed to:

Launched in July 2017 and managed by two leading infrastructure investment firms Amber Fund Management Ltd and M&G Investments (Prudential PLC), the Fund catalyses private sector investment with the objective to become self-sufficient, and the hope to bring jobs to under-performing economic areas of the UK.

Although the UK has recovered its pre-crisis level of economic growth, there are still strong regional discrepancies in economic performance. The Northern and Midlands regions are lagging behind cities like London, Manchester, Edinburgh and economic clusters like the South East in terms of productivity, wages, living standards.

In the Green Paper digital is identified as a clear opportunity to help bridge the gap between high performing clusters and the rest of the country. Prospects to bring qualified jobs back to rural areas and to boost data and digital skills throughout the country have been justifications to set up the £400 million Digital Infrastructure Investment Fund to provide high speed broadband services across the UK.

One clear challenge is that economic development tends to happen by clusters, with specific city or regional hubs concentrating infrastructures, social networks, skills and jobs opportunities relating to a specific industry.

Digital entrepreneurship is particularly significant given that digital technology is not “localised”. It plays a key role enabling innovative local business models and driving economic growth across the whole country.

As local institutions, networks and policy conditions can have significant impact on entrepreneurs, Nesta put together an idea bank for local policymakers, showing how they can support digital entrepreneurs and thus, help develop and grow sustainable creative local ecosystems.

3. Investing in digital skills is essential to training people for future jobs 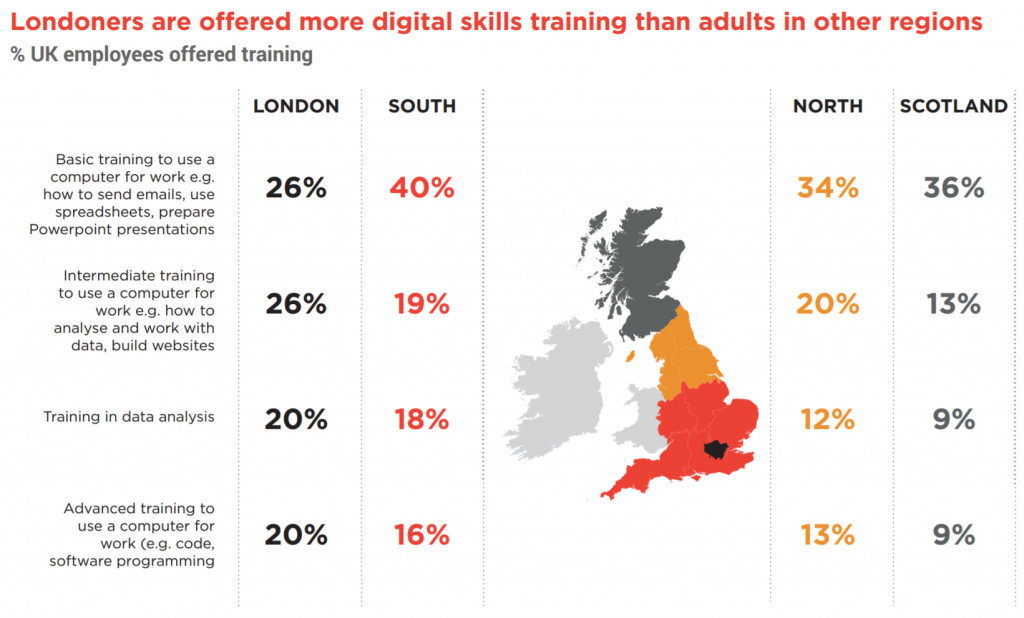 With a 2017 report by Ipsos Mori/Lloyds Bank showing that more than 11 million adults in England lack basic digital skills, the Government has committed to funding adult digital skills training. For those still in education, it will work with the Institute for Apprenticeships and Technical Education to determine what digital content will be included in the new technical education routes.

This is linked to the UK talent pipeline and the future of work, with the Government committed to developing a more flexible and future-facing labour force. Encouraging companies to invest in ‘lifelong learning’ by upskilling the current workforce throughout their careers for example,would help to create a workforce capable of adapting to the changing requirements of modern labour market, and in the case of digital skills, to harness the benefits of the digital economy.

Nesta’s new report The Future of Skills: Employment in 2030 outlines why public dialogue around automation is dangerous and often narrow. The research outlines that there are opportunities for boosting growth – if education and training systems are agile enough to respond appropriately – but that skills investment must be at the centre of any long-term strategy for adjusting to structural change.

Significant effort has been made over the last few years to digitalise Government services. The aims include improving efficiency and access to public services’, setting the example and showcasing the use of digital tools. The Industrial Strategy outlines a series of initiatives to improve the Government’s digital services to support economic development and provide better services to its citizens.

For instance, the identity assurance system gov.uk verify provides a single trusted login across all UK Government digital services, verifying the user’s identity within minutes. It helps give people “safer, simpler and faster access to government services” like filing their tax or checking the information of their driving license.

The Department for International Trade launched a new platform, great.gov.uk, for UK companies wishing to export or invest. With the objective of simplifying the use of Government trade services, the platform matches supply and demand, putting power in the hands of businesses. Once registered, companies are able to promote their goods and services to international buyers, search a multitude of export opportunities and access preferential deal negotiated with online marketplaces.

Launched in November 2014 to simplify procurement process and practices, GCloud Digital Marketplace – an agreement between the Government and suppliers who provide cloud-based services – removes the restrictive practices around bidding for frameworks and contracts. It enables companies to join a framework – a preferred supplier list – based on capability, not size, meaning a level playing field for SMEs to compete through fair and open competition.

Recent updates on this digital procurement platform reveals that over 3,300 companies (among which 91% of SMEs) have registered on this Digital Marketplace to supply public services, and the Government spent over £1.7 billion with digital and technology suppliers (of which 56% went to SMEs).

This article was written for Readie by Charlotte Goujon and Jen Rae from Nesta’s Innovation Policy team.

2. Can Britain’s digital economy be a global leader?