Optimists argue we just need to be a little more patient. Pessimists suspect that, behind the techno-utopian buzz and bluster, there’s no “there” there. Who will turn out to have had it most right?

In a new report on the digital economy, leading economist, Bart van Ark introduces a suite of metrics that maps out where technological adaptation stands today, and where it is headed over the next decade.

Here, Bart talks through the findings and tells us what to expect in the future.

Let’s start with what the existing statistics are telling us

Productivity growth has been on a declining path in most mature economies since a decade. Annual US labour productivity growth slowed to 1% on average between 2007 and 2014 (down from 2.4% in 1999–2006), and stands at just half of that today. 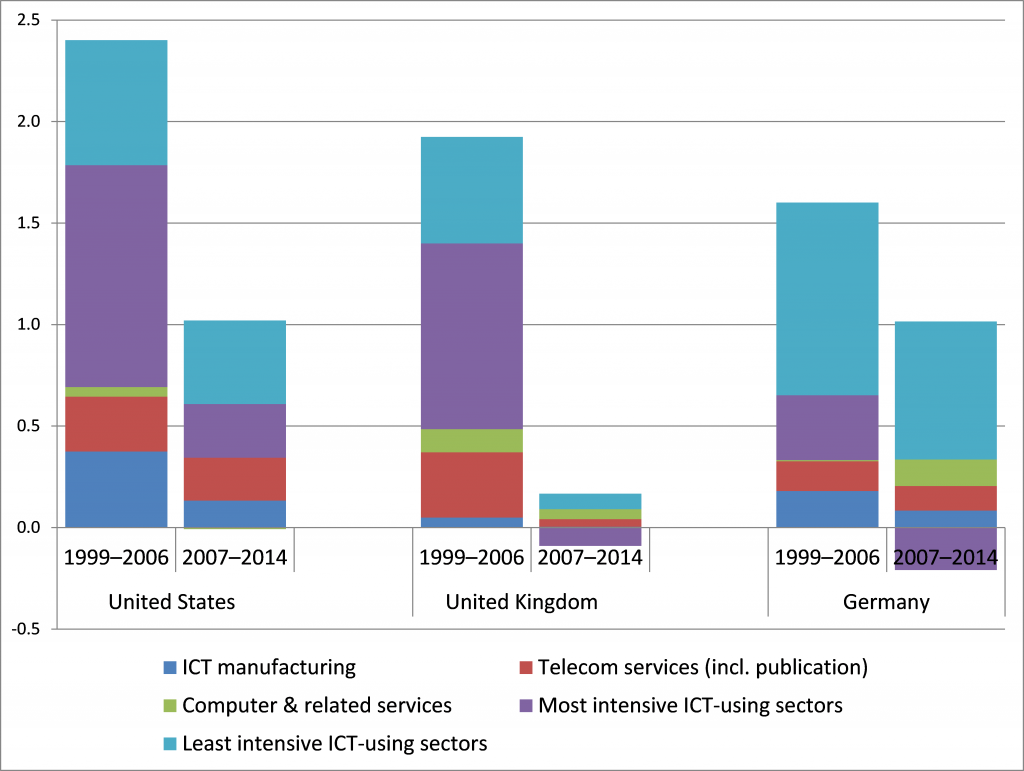 ‘Most intensive ICT-using industries’ refers to the top half of the industries with the highest share of value of ICT investment plus purchases of ICT services as a percentage of ‘synthetic output’ (which is value added at industry level plus the intermediate use of ICT services). Least intensive ICT-using sectors refer to the bottom half of industries in terms of ICT intensity. Source: The Conference Board, Navigating the Digital Economy, May 2016.

We need to be careful in interpreting those numbers because common macroeconomic statistics may not pick up all the effects from the New Digital Economy.

For example, we estimate that relative prices for communication equipment and software are still dropping by almost 10% per year. That alone is enough to understate productivity growth by about 0.3 percentage point a year. But it’s not enough to account for the entire productivity slowdown, as has also been confirmed by other research.

Of course, one can be more outspoken about the measurement problems and argue that all the consumer benefits from new digital products and services and sharing platforms should be included in GDP. But then we need to agree what to include and what not to include. The consumer benefits from streaming TV? Probably, yes. And the costs to protect and secure our private information, and risks involved if we don’t get it right? Probably also.

How to go about measuring will be a Hercules task. 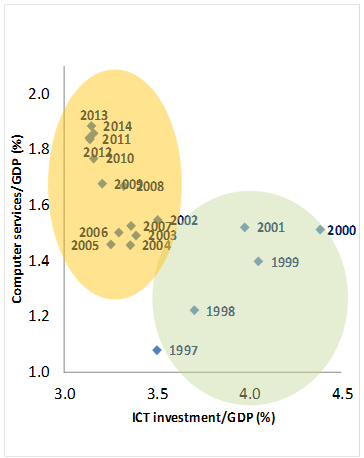 Which leaves the question: why are we not seeing the productivity effects of all this activity?

As we describe in our report, it turns out that more spending on digital innovation doesn’t give us the productivity growth yet. That also requires business innovations, for example the ability to turn data analytics into insights that help to generate new product and service offerings.

Companies need to do a lot more than buying cloud services to go through this digital transformation process. For example, we find that higher investment in knowledge based assets, such as product and service design, workforce training and organisational improvement, are highly complementary with increasing spending on ICT services. But it will be a while before we will see the effects on productivity.

1. Five minutes with… Olivier Midière, Ambassador for the Digital Economy

3. How should we govern the digital economy?